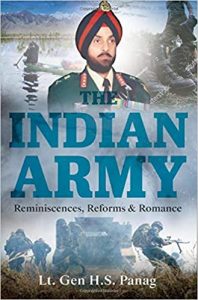 Lt Gen HS Panag writes that having commanded two armies, the northern and central army, he had over six lakh troops under him at some point or the other. Most of them may have seen the badge he wore on his uniform since his colonel days that read: ‘Don’t do anything that I don’t do. Do like me, do better than me and do it now!’ This was his command philosophy, arrived at through inspiration from his father, a redoubtable colonel, and with experience since his National Defence Academy days as Academy Cadet Adjutant.

The leadership example of Panag accounted for his fearsome professional reputation across the service. He was known to challenge youngsters visiting his office to pushups and reputedly often came out ahead. He writes of winning his spurs with the soldiery when on a long-range patrol he lugged the heaviest load–the wheat sack–all the way. On reaching back, they carried him on their shoulders into the camp. This distinguishes military officers from the other professions, implying that not only must officers have brains but also brawn. Panag in his book brings out the brains aspect equally dexterously. He is said to have boasted on having read some three thousand books while in service, no mean feat considering soldiering is not an idyllic sojourn.

Besides brains and brawn, more important is moral fibre. Panag’s standing up to the troll brigade over the Right-Wing government’s dissimulation on Chinese action in Ladakh is an example. He led a combat group there, so knows the terrain. His commentary, along with that of a couple of notable veterans, has been of the order of speaking truth to power, which in today’s times in India unfortunately requires considerable guts. Since this book was written prior to the crisis up north, those commentaries do not figure in the book. However, premonitions of danger and what needs to be done to meet it abound in the book, indicating that had the national security minders listened there may have been no set back in Ladakh, requiring the horde of prevarication as now. His section on China is a must read on that account.

The first section in the book, on human rights, also sets him apart. On the military’s human rights record, the General is perhaps a lone ranger, testified to by his calling out the Army Chief for awarding Major Leetul Gogoi, the villain in the ‘human shield’ case.  He has used his experience post retirement on the armed forces tribunal to good effect by pointing out the gap between the army’s precepts on human rights and accountability for its actions. He was the only one to write of the second case that the Supreme Court dealt with when it allowed the army to take over the Pathribal case. In the event, the Pathribal case perpetrators were let off by the army. Panag points out the infirmity in the second case, regarding five killed in a fake encounter at Dangari, in Assam, which he prognosticated would lead to perpetrators being similarly let off. His is therefore an important voice that problematizes the official narrative of terrorists violating the human rights of security forces.

Panag flows with the tide in his section on Pakistan. He believes that the military has a role to play, the extent of which is a governmental decision. To him, India’s strategic options range from surgical strikes to limited war and include generating a fourth-generation warfare threat for Pakistan within Pakistan, what National Security Adviser Ajit Doval once famously referred to as the Baluchistan option. Even so, the first strategic option on his list is to ‘engage Pakistan diplomatically to work out a mutually acceptable solution within India’s constitutional framework and without change in territorial sovereignty’ (p. 182). He was army commander in the period when this option was being tried out.

Panag’s approach to Kashmir, to which is devoted one section, similarly carries cadences of the period of relative quietude when he was in command. He naively suggests that the Prime Minister reach out and hug the Kashmiris. Indeed, the emotional connect could work wonders, as was the case spectacularly with Vajpayee and less so with Manmohan Singh. Kashmir has been reduced to Delhi’s control rather than, howsoever imperfect, democratic control. Panag is prescient in saying that this is a set back that is yet to reveal its full extent and to play out fully. Though the massive protests he anticipated have not occurred, he cannot be faulted for not having anticipated a pandemic when the book went to print. In any case the dragnet across Kashmir suggests that the authorities were also equally worried on this count.

The other sections carry short pieces on leadership, reminiscences and on thus far unremarked military heroes. He writes these up simply, typical of a fauji. His poignant sketch of the love affair between a Sikh lad and a Kashmiri maiden is one waiting for a movie to take it to a wider audience. The story is evidence of the different life scripts that play out in Kashmir, of fear and hate juxtaposed against empathy and kindness.

The book comprises commentaries and articles by Panag on three web portals–Newslaundry, The Print and Times of India–from his retirement lair in a village in Sirhind. Divided into parts on human rights, reforms, leadership, reminiscences, conflict and unforgettable heroes, it has something for everyone, from a defence watcher to a youth enamoured with the fauj. This is perhaps the last such critical work of depth from a general since Krishna Rao’s tome. Subsequent works, such as by Shankar Roy Chaudhury, ‘Paddy’ Padmanabhan, ‘JJ’ Singh and VK Singh, and even from the formidable intellect, Sundarji, were mostly rather light (excluding here Sundarji’s writings on the nuclear question). Other than Rustom Nanavatty’s look at counter insurgency, we have not had from our generals the calibre of work such as that by Rupert Smith and Stanley MacChrystal. However, the strategic commentary over the years by veterans, such as Gen ‘Mucchu’ Chaudhury, ‘Monty’ DK Palit, Mathew Thomas, Afsir Karim, Dipankar Banerji, Ashok Mehta, Gurmeet Kanwal and Ajai Shukla to name some, has been remarkable for a nation supposedly lacking a strategic culture. Since there is more to General Panag than 6-minute reads, he must step up on his next foray for the benefit of Indian strategic literature.