The strategic doctrine of an Assertive India

India is a status quoist power. This is easier to establish in terms of its approach to territory. It appears to have reconciled to the fact that some of its territory is occupied by neighbours, Pakistan and China. While rhetorically it is inclined to see the return of this territory, it has not taken any military or political steps to bring this about. However, it would not like to see any more territory lost to neighbours and on this count has a credible military in place. However, is India politically a status quoist power?
Politically, it is an emerging power. A regional power, it is now also a power of reckoning in Asia. This can be easily seen from the busy diplomatic schedule of the new prime minister in his first year. Its growing economic clout, self-evident from the finding that it has displaced China as the fastest growing economy, is being translated into political power. Its growing economy is also enabling military power, with it being the largest importer of weapons over the past decade and having its defence budget touch $40 billion this year. This makes India’s position as a regional power unassailable, thereby partially sustaining the proposition that it is politically a status quo power.
However, India is also demonstrating assertiveness as a power under the new National Democratic Alliance (NDA) government in Delhi. The strategic refrain of the political forces currently in government when in opposition during the preceding United Progressive Alliance (UPA) regime was that India was not measuring up to its weight. It was constantly reactive and on the back foot. Such arguments came to a head in the wake of the 26/11 attacks in which India did not respond militarily. When elected via a majority in the lower house for the first time in two decades, the government has attempted to distance itself from the strategic policies of its predecessor.
The most visible manner it has done so is in the way it cancelled the talks with Pakistan last August and engaged in a prolonged standoff with that country on the Line of Control (LC). Even while engaging China, it is clear from its stance with Japan, the US, Vietnam and Australia that it is hedging its options even if not part of the containment of China. The recent outreach by the prime minister into the Indian Ocean Region, backed by rhetoric of India as a security provider, indicates the direction of the future. Cumulatively, these are suggestive of an Assertive India.
This means that it is not quite a status quoist power politically, but would like to see a change in the status quo with India acknowledged as a pre-eminent power in the region and one with a continental role in Asia. The former implies distancing from Pakistan decisively and the latter implies measuring up to China, if not substantially, at least nominally and perceptually. Therefore, the short answer to the question is that politically India can be counted as a quasi-revisionist power.
It is a truism that the strategic doctrine of a status quoist power is different from that of a revisionist power. The former tend towards the defensive and defensive-deterrent end of the doctrinal continuum, whereas the latter’s strategic doctrine can be situated towards the offensive and offensive-deterrent ends. The continuum can be imagined with defensive at one end and compellence on the other, with defensive-deterrence, offensive deterrence and offensive, as three mid-course stops (See Figure A below). 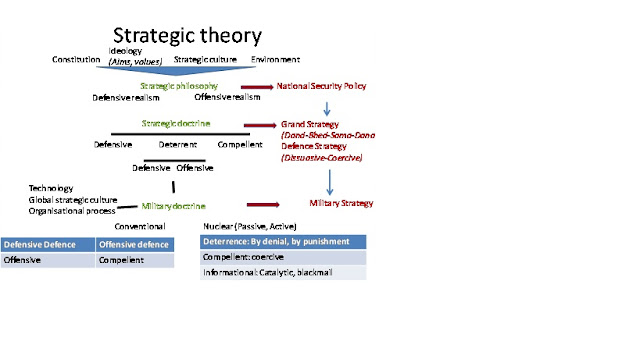 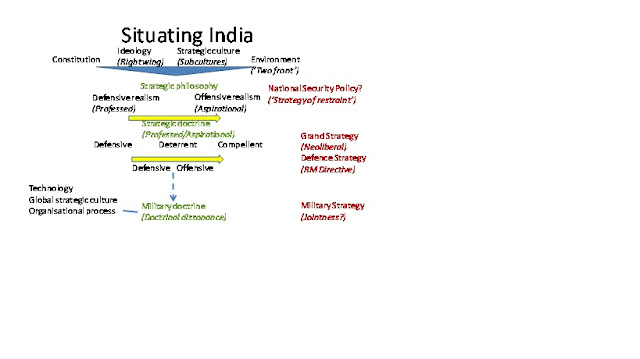