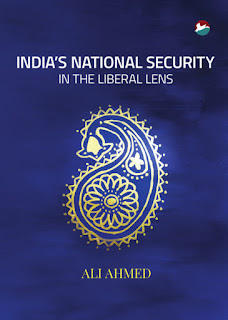 Foreword
The book comprises my commentaries covering the strategic scene in
India mid-decade. The principal movement it dwells on is the political
makeover in India in the takeover by cultural nationalism of the state.
In the main the book deals with the strategic implications of this major
development. The commentaries reflect the unease among liberals
and rationalists with the right wing lurch in Indian polity. The main
current tying the commentaries together is the reminder on the need
for caution on the national march towards great power and wariness
with the strategy espoused by cultural nationalists and majoritarian
nationalists needs to be taken.
I have chosen to keep the commentaries chronological in the order
they were published rather than club them into themes. Readers who are
part of the attentive public would be able to see how India has shaped
up on the strategic front and follow the national security debates. By
this yardstick, the book is a record of the times in the national security,
strategic studies and peace studies framework. I trust the book will
serve as a useful refresher for those who have followed the discourse and
a useful introduction to national security thinking to those new to it.
A recurrent theme in the book is manner of employment of nuclear
weapons. Although I am completely anti-nuclear, I have engaged with
this issue in order to argue against what I consider an imbecile nuclear
doctrine of India. It is to my mind both genocidal and suicidal. I have
tried to bring this out and argue that nuclear weapons need to be used if
at all unlike as envisaged in the doctrine but at the lowest threshold and
both the exchange and the conflict terminated forthwith in case of their
introduction into a conflict.
On an ideology driven strategy, I note that this cannot but
favour militarism and militarization. Strategy requires rationality
uncontaminated by ideology. The influence of Hindutva on strategic
thinking is easy to see now that the victory for the ruling party at the
polls has emboldened strategists to come out of their closet of cultural
nationalism. Such thinking glorifies India and in particular takes a
dim view of Pakistan. This to my mind renders askew rationality and
is liable if uncontested to land India into an avoidable doctrinal and
strategic cul de sac.
I hope the book creates a niche for liberal perspective in strategic
studies. It would be of interest to practitioners, thinkers and students
as well as those wanting to keep tab on national security affairs that
cannot be left to generals and strategists alone.
CONTENTS
Foreword
India : Dissonance on the doctrinal front
Security demands strategy before action
A conflict strategy for India in the TNW era
Information Operations in Limited Nuclear War
India-Pakistan: Ties Finally Looking Up?
A call for nuclear sanity
The Marathas at peacekeeping frontiers
What the next war spells for Kashmir
The Strange Silence Surrounding an Indian Military Exercise
The Diplomatic Dimension af a ‘Swift And Sharp’ War
Avoiding Nuclear War in South Asia
Kashmir: Potentially back with a bang
The strategic doctrine of an Assertive India
A cautionary word for the NSA
India-Pakistan: Silver linings and band aids are not enough
India’s Hard Power Options Considered
India-Pakistan: With NSA Talks Aborted, What Next?
Nuclear Battlefield Preparedness
India: Dissecting The Doval Doctrine
India-Pakistan: Please use the impending opportunity well
India-Pakistan: Contrasting Doctrines
What Does Khalid Kidwai mean?
1965 War: Through today’s lens
Doctrine in Civil-Military Relations
What This Year’s Maneuver Season in India Tells Us
This Year’s Maneuver Season In India
Opening Up The Doctrinal Space
Conventional Backdrop to the Nuclear Foreground
Visualising the Impact of Nuclear Operations
Balancing India’s Right
India’s forthcoming nuclear doctrine review
India-Pakistan: Visualising the Next Round
Limiting Nuclear War in South Asia
Dissonance in India’s Strategic Doctrine
At the Conventional-Nuclear Interface
Posted by ali at 14:58